"I have two drawers of pantyhose, but I don't like what they do for my backside," Julie Newmar told People Magazine in 1977.

Nudemar pantyhose was made from a stretchable Monsanto fabric with an elastic back seam that separated the buttocks. She won her patent for the pantyhose in 1975.

Julie Newmar was an acclaimed actress, model, dancer, writer and businesswoman. She’s credited to be the first woman to play the role of Catwoman in the 1960’s Batman television series. 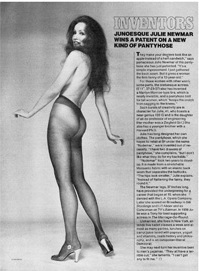